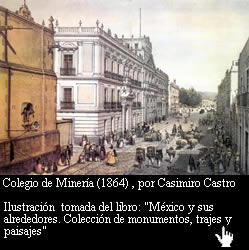 Palace of Mines, masterpiece of Latin American neoclassicism, is situated in Mexico City, at the end of Tacuba Street, facing the plaza named after Manuel Tolsá, where the equestrian statue of Charles IV, better known as "El Caballito", creation of the same artist, is located. The most important civil building, made up by this Valencian sculptor and architect, was built to house the Royal Seminar of Mines in order to give academic instruction to miners since 1813.

The majestic monument of elegant forms and exact proportions where light, space and functionality merge, is one of the most outstanding constructions within Mexican architecture. It is part of the artistic and cultural patrimony of the National Autonomous University of Mexico (UNAM), which, at present time, is under the custody of the School of Engineering.

The extraordinary Ancient Chapel, the Ceremonies' Hall, the Dean's Hall, the Principal's Hall, the Deans' Gallery, and the Library contribute to the beauty of the Palace, in some of them great examples of mural painting (XIX century) are kept as the Manuel Tolsá Museum that houses academies and objects related to his duties as well as masterpieces of some other artists from his time. To these spaces five patios are added: the main one with two floors, framed with arches, pilasters and beautiful and singular columns that lead to a master staircase. 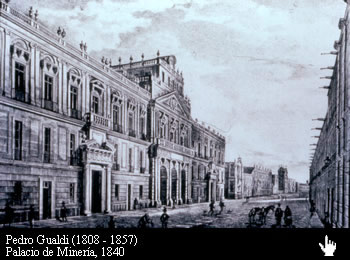 As years passed it was necessary to remodel and restore the monument completely due to foundation and structural problems that the underground causes in Mexico City, so therefore a refurbishing of the building was carried out by the Former Students' Society of the School of Engineering (SEFI). In 1976, after the restoration, the Palace was donated to this school for the use of the school and the students.

Nowadays, this building houses the home office of the Continual and Distance Education Division (DECD), the Engineer Bruno Mascanzoni Information and Documentation Center, the Historical Archives of the Palace of Mines, the Manuel Tolsá Museum, different engineering groups as well as different administrative areas.

Every year the Palace of Mines is used as temporary home office of one of the most important world-wide known publishing events in the country: The International Book Fair.